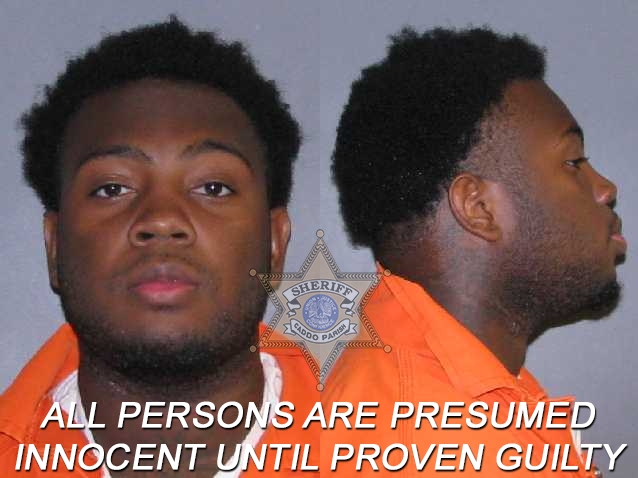 A Shreveport man has been arrested for a shooting that occurred this past Saturday at an apartment complex in east Shreveport, said Caddo Sheriff Steve Prator.

CPSO detectives arrested Treveion Montrell Thomas, 20, a resident of Bayou Rouge Apartments, located at 7710 East Kings Hwy. Thomas is accused of shooting Nicholas Mitchell after finding him hiding in Thomas’ bedroom closet. A woman at the apartment had invited Mitchell into the home while Thomas was away. After being shot the first time, Mitchell ran to the door where he was shot again. Thomas continued to fire warning shots toward Mitchell as he ran away. Mitchell fled the apartment and collapsed in a nearby ditch.

Mitchell, 18, of the 1600 block of Desoto Street in Shreveport, was taken to University Health for treatment.

Detective Matthew Lucky said that during a search of the apartment deputies found several handguns, one of which was stolen, approximately 164 grams of marijuana, and drug paraphernalia.

On Monday, at the conclusion of a CPSO investigation, Thomas was booked into the Caddo Correctional Center for aggravated second-degree battery, illegal carrying of firearms, illegal possession of stolen firearms, distribution of marijuana, and possession of drug paraphernalia.